Lee Patterson: “I think about the various things on my tabletop as a collection of collaborators” 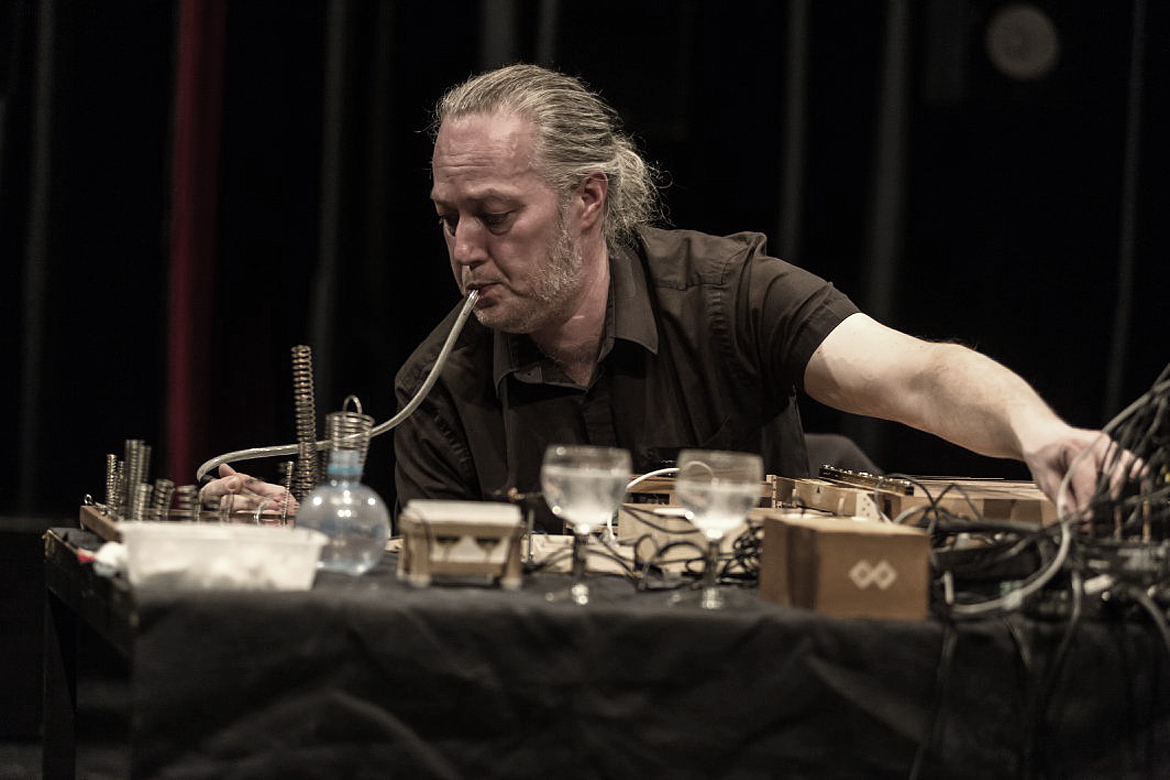 British musician and sound artist from Manchester, Lee Patterson, is really quite obsessed with the sounds of nature and the sound itself, sound that travels through other media, not only the air but through water, metal fences, concrete bridges and the like. In his music he uses amplified objects and processes. His work includes improvised music, recorded sounds from the environment, music and installations. Lee Patterson is trying to understand his surroundings using auxiliary and his organic ear. During his career, he has recorded more than twenty records with various improvisers, composers, filmmakers and sound artists. Among them are the famous sound artist Max Eastley, British musician, journalist and theorist David Toop, some of the most promising younger sound artists such as Ben Gwilliam, Rie Nakajima, Benedict Drew and Toshiya Tsunoda, and young British film-maker and nominee for the Turner Prize, Luke Fowler, guitarist Keith Rowe, Finnish electronic musician Mika Vainio (Pan Sonic), group Common Objects (with John Butcher, Rhodri Davies et al), vocalist Phil Minton, American violinist and field recordings artist Vanessa Rossetto and British contemporary ensemble Apartment House. Along with Japanese audio and visual artists Tetsuya Umeda and French reedist Xavier Charles he forms a trio Atmosperique. Together with Charles and Irena Z. Tomažin they form a trio and with the latter he also perform in the duo. One of his latest projects is the opera by Irish composer Jennifer Walshe ‘Time Time Time’, where he shares the stage with her, MC Schmidt (from Matmos), Aine O’Dwyer, the philosopher Timothy Morton and the Scandinavian duos Streifenjunko and Inge & Vilda. Under the organization of KUD Mreža, Patterson is staying on an artist-in-residence, where he is working with improviser Samo Kutin. They will perform on 3 April at Klub Gromka as part of the concert series FriForma and FriFormA\V. We briefly talked to him about his work and collaborations with Slovenian musicians.

Luka T. Zagoričnik: Your instrumentarium is a set of amplified objects, strings and springs, and amplified processes that are at once quite controlled but unpredictable at the same time, and need certain time to develope. You use this set up in improvised music context which is a collaborative one. What does this bring to your music making and why you have choose this environment for your work?

Lee Patterson: “No strings – yet! Amplified processes have a time span, a volume envelope within which the sound events are triggered, grow, develop and fade away… and yes, sometimes they do as they please no matter what I intended! I sometimes think about the various things on my table top as collection of collaborators… or otherwise! This environment evolved, perhaps through many small or micro choices… following possibilities uncovered by investigating with recording and contact mics. Of course, my ears have been influenced by various forms of electronic and improvised music as well as more recently by early and folk music traditions, so perhaps these influences occasionally act as filters, influencing my interest towards the sounds. I think or hope that this gives me quite an unusual palette of sounds to work with and therefore I can make a music that is fairly original.”

Luka T. Zagoričnik: You also work in the field of so-called field recordings which is closely connected to what you do with your instrumentarium. In both you are searching and capturing sounds via the medium of microphone. How do you see those two connected in your work?

Lee Patterson: “The two are directly related, for me recording isn’t just the capturing of sound, it is also a testing space, a sketch book where one can develop and work out ideas, interrogating materials to understand their musical potential. Eventually, maybe these materials and objects become instruments. Recording has also helped me to understand the world, and the energy passing through it, in an unexpected way – all sounds are made by the transformation of energy as it is transduced by instruments.”

Luka T. Zagoričnik: Personally, I know you quite like the work of Samo Kutin, improviser on hurdy-gurdy with whom you will work on KUD Mreža’s FriForma residency and play a closing concert at Klub Gromka. Although he plays an instrument, he treats it more like a sound machine, an object which is close to your work. What is it in his work that excites you and how do you see you two working together?

Lee Patterson: “I first met Samo when he was busking on the street in Ljubljana. I was wandering around town, being a tourist, but I also had my recording gear with me. I heard someone playing what sounded to my ears like traditional hurdy-gurdy tunes – a sound that I love so I become very excited and triangulated upon the poor fella. I approached him and asked if he minded if I record him, he was gentle and friendly and was happy for me to do so. After, we started to chat and I discovered that he knew you, Luka, and also Tomaž Grom and that we would both be visiting Tomaž’s place the next day to be filmed and recorded for Tomaž’s ongoing video-performance work with improvising musicians. When I heard and saw him performing, I was blown away, it was totally different to the material from the day before – as you say, he uses the instrument as a sound machine, with the very direct use of contact micing and other techniques to create an amazing array of timbres and rhythms – very unconventional! I hope we can explore a number of areas together, from industrial noise blasts to subtle interrogations of timbre and space and maybe some rich drones and folk style workings.”

Luka T. Zagoričnik: This will not be your first encounter with musicians and improvisers from Slovenia: you have worked with vocalist Irena Z. Tomažin in various groups and formats from quartet through trio to duo. Vocals are peculiar since they are very physical, personal and related to the body while in your work, especially your work with amplified processes looks a bit detached in a sense that you set them in motion and then magnify them, capture them in the medium of sound. But at the same time, they have also this ‘theatrical’ aspects to it. How would you describe your collaboration?

Lee Patterson: “Yes that’s right, Irena and I have worked together a few times, with Xavier Charles and also with Tetsuya Umeda. Irena is very interesting in that she uses her voice as an instrument and is very flexible with it. She is capable of skilfully matching and also contrasting the sounds that I can produce. This creates interesting tensions, pushing and pulling at the sound space that we share – embodied sound and disembodied sound intermingling – bringing a very human element to the musical table. I think about our music as weird form of experimental, electronic pop!”

Photo of Lee Patterson by Marcandrea