Where Else But Forward… 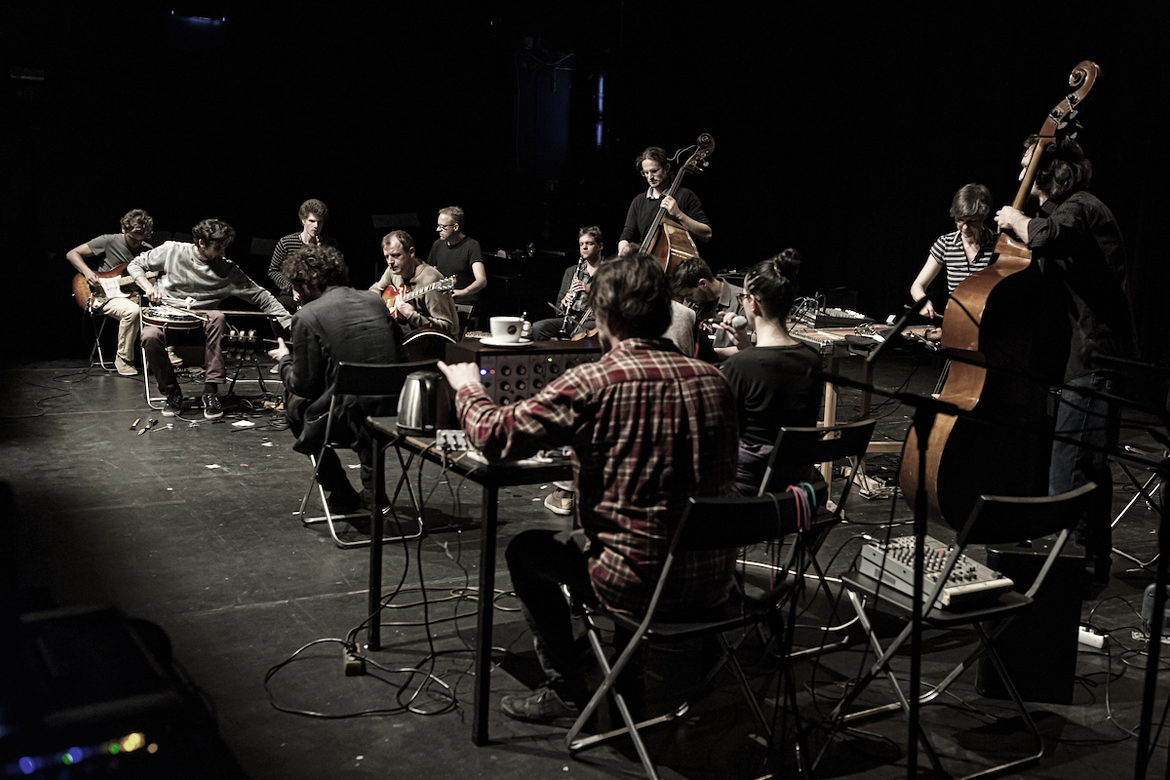 To write a detailed history of freely improvised music of any given place is a contradiction in terms. In its essence improvisation does not lend itself easily to such retrospection; the lively activities of music circles that follow an improvisation ideal resist the orderly historical reconstruction in the same way that free improvisational form tends to elude any formal analysis. A casual chronicler however cannot sidestep the simple fact that over the last years the major impetus for improvised music in this part of the world has come from the strivings of Sploh Institute. Their activities rest on a few basic assumptions, which ensure that the scene continues freely and renews itself in the process. The most palpable expression of this is to be found in the concert cycle entitled Confine Aperto, which in principle in terms of genre, ensemble and location seems highly unprincipled. Behind the scene there is the on-going and regular improvisation workshop called Research, Reflection which follows similar tenets: its free and continued activities rest on a few rules, or rather on smallest common denominators as opposed to some formula. Somehow it seems that all these activities emulate the phenomenon of improvisation in its basic contours, in a continuous moving forward.

Namely the fundamental structural maxim of improvisation seems to lie in the not-looking-back. Hardly a novel proposition, nor is it particularly academic, rather it derives from an etymological essence of improvisation as unpremeditated activity, with all the focus on the present moment and how that moment evolves in the future. The meaning of not-looking-back might perhaps be elucidated better if we take it to signify the major difference that exists in terms of musical structure between composition and improvisation. The former is historically and phenomenologically speaking determined precisely with this looking back onto the past. Old compositional forms attest to this, as for example the repetition of ritornellos in a baroque concerto, the theme of a fugue or the function of a recapitulation in a sonata form. Something similar can be said of the musical syntax which maintains its coherence in the tonal harmony through a more or less even cadence model and a return to the tonic harmonic function – a tonal system effectively means a continuous looking back towards its beginning. When Arnold Schönberg made the twelve chromatic tones qualitatively equal to each other and therefore did away with the hierarchy between harmonic structures, he transposed the composition into the realm of free chromaticism and with that into the realm of free forms, of an unexpected »expressionist logic« and close to the stream of consciousness; at least until a good decade and a half later, with a strict dodecaphonic method, he went back to composing within the classical formal patterns. It is no coincidence that it is Schönberg’s music from this short period of free atonality that is often to be found amongst the references of musicians who are free improvisers.

It seems to be the case that it is only the freely improvised music of the last half a century that has decisively separated improvisational activity from composition making. This is on the one hand the result of giving up the idioms that connect improvised music with the act of composition. In the 19th century, for example, an improviser on the organ was still thinking about the ways of modelling the phrases, about cadences, harmony periodicity, even about the formal order. All of these of course constitute the elements of composition making – for him Schönberg’s explanation of composition as »a slowed-down improvisation« would have been apt indeed. On the other hand, for a long time improvisation was dependant on the pre-composed elements. Ragas in Indian classical music or the chord progression in the jazz standards are but the result of decisions taken by composers.  It is a wonderful paradox that in the decades following the Second World War two fairly contradictory practices found themselves occupying the same musical space: the free, radically spontaneous improvised music making and the strictly structured, radically fixed composition making. For both the practices, the findings of the musical language analysis undertaken at the end of 1950s by György Ligeti would still hold true. Ligeti had then made a convincing case that the new musical expression is dictated by four processes: the resistance against established formal schemes, the disappearance of conventionally received musical syntax, the dissolution of the even metre or pulse, and the weakening of the functions of separate formal sections that have lost their »vector-like« properties. This would seem to offer a great platform for thinking about the connections and divergences existing between acts of improvisation and composition. The open and elusive form as well as the irregular musical and sound syntax of free improvisation is born out of a fast and intensive engagement with musical ideas. When the musician faces an idea, and begins to play with it as the idea is emerging, taking into account its transient nature and beginning to let go of it, as he continuously searches for a new one, we can only imagine that reflecting on the place and intention of the idea in the context of the entire musical trajectory as well as the history of music is but somewhere on the margins of the improviser’s consciousness. The compositional liberalization of the musical form, syntax and rhythm in the 1950s, however, emerged more out of the negative reaction against the past aesthetic standards than out of a practical need. The modernist ban on consonance and repetition turned into an ideological norm. Elliot Carter has rejected even his modernist predecessors Charles Ives and Edgard Varèse, writing thus: “I cannot understand the popularity of that kind of music, which is based on repetition. In a civilized society things don’t need to be said more than three times.” Essentially a world-view statement, in our context it sends out a warning signal against repetition in musical modernism. Perhaps it is not futile to add here that Carter’s penchant for process and evolution in his works, as for example in his Night Fantasies, comes very close to the nature of an improvisation continuum, except that it is highly determined by the Western compositional practices as control over the balance between form and matter, their proportions and over progress with mirrored seeing and paying attention to the past.

A short theoretical digression, or rather tightening: the »amnesia« of the past in the improvised activity could in a sense lead to a patchy musical cartography, a disconnected sequence of sound events, but the truth tends to be very different. A sketch of the improvised music phenomenon that this note offers has to take into account also the different natures of musical time in improvisational activity and composition making. When a composer is creating and writing down a score, what s/he effectively does is structures and manipulates in advance the time sequences through the means of sound – John Cage nicely explains something to this effect in his essay Defense of Satie. Conversely, the nature of time in improvised playing is the nature of time with which we are confronted in our everyday lives. And this is not necessary the simple system of a constant forward movement of »the now«, of the point which cuts sharply between the past and the future, but something that can be captured well with Husserl’s concept of the inner temporal consciousness. With his cognitive approach to the phenomenon of time Edmund Husserl came to the conclusion that in every moment we not only take cognizance of our immediate present situation, but that every »now« encompasses also the experiences of our past, that is to say temporarily distant perceptions. These sensory accompaniments of any given moment Husserl refers to as retentions, which he then carefully differentiates from the memory reproductions of the past. Such expanded horizons of our present can be helpful when we try to understand how a freely improvised music arch can in fact be cohesive, even when the musician is completely immersed in the momentary act of kneading the sound matter. At the same time improvisation can also become a beautiful analogy for other human activities. Many an improviser can tell you that improvising is not merely an act of music making, but is primarily a general imperative of life.

To write a detailed history of freely improvised music of any given place is a contradiction in terms. A casual chronicler however has nevertheless been given here an opportunity to modestly reflect on how improvisers “don’t look back” in the here and now. What can be seen is contempt for genre norms and an allegiance to the idea of freely improvised music as non-idiomatic improvisation. Yet today, a few decades after Derek Bailey had theoretically dealt with, and in collaboration with like-minded individuals practically realized, the non-idiomatic improvisation, and at a time when trans-genre stance has already become an entrenched marketing label, a principled negation of genre and idiom is but problematic. The key characteristic of the genre, according to Grove Dictionary, is repetition. Genres emerge as they codify past repetitions and invite future ones, and it can be surmised that something similar holds true of idioms. Elements of reductionism, drones, extended instrumental techniques, as well as the recognizable procedures of electro-acoustic creations that can be heard in today’s improvisations, have now, through repetition, moved into the field of recognizable idioms, and their repetitive free circulation has constituted itself in a way akin to genres. History is full of such cases. Towards the end of his discussion of the genre in the Musik in Geschichte und Gegenwart encyclopedia, Hermann Danuser wonders whether, given the perpetuation of differences between different compositional practices, such as electro-acoustic music or sprachkomposition, it might not be better to speak of them in terms of different genres of musical modernism. The movements that constituted themselves in radical opposition to repetitions of the past, tended later to become codified. With both contemporary composition and improvisation, the solution to this problematic often emerged out of their basic formal properties. Some of the most suggestive and meaningful scores of the last decades, as for example those of Sofia Gubaidulina or those of Wolfgang Rihm, were born precisely out of admiration for the old sound-worlds. But top-notch improvisation to this day is one that, as it has always managed to do, exists with a good degree of self-reflection, while at the same time is capable of turning away with utmost nonchalance and heading for – where else but forward.

Essay was oroginally written and published in 2012 as part of the booklet for a compilation ‘Sound Disobedience’, released by Zavod Sploh and L’innomable. You can buy it here.